Get Your House In Order

Last week the kids and I met Tom at the church for an event. Fifteen minutes before we had to leave a neighbor kid came to the door. It was her birthday so she brought everyone cupcakes. She left and my kids were scarfing down the chocolate cupcakes before we had to leave. Thick globs of chocolate icing ended up on my new rug. We were supposed to leave the house by this time but instead I was frantically scrubbing my rug trying to get the stains out. In the hectic chaos, I guess I forgot to lock the front door. 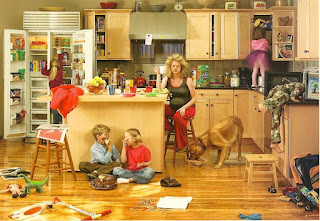 We arrived home around 9:30 at night and pulled in the garage. My 7 year old daughter went in the house first and discovered that the front door was wide open. Tom coaxed her back in the van, we backed out of the garage and parked down the street. Tom proceeded to call the police. Out of great distress, I tried to stop him! I explained that I would rather risk my life than have a police officer go through my house at that time! You see, with the busyness of the week, my house was in total disarray! There were toys and clothes on the floor, dirty dishes in the sink, piled up laundry on the couch and there may or may not have been underwear on the bathroom floor.

Tom didn't listen to me begging him not to call. As the man of the house, he felt it was his duty to protect us. Well, not only did one policeman show up but FOUR! I was mortified! I ducked down in the van and let Tom deal with them.

Finally after 4 police officers walked through every inch of my house with flashlights, we discovered nobody was hiding and nothing was stolen. Let me tell you though, that next day I was very motivated and put it in full gear to get my house clean!

Next week is the beginning of Lent. This is a time for us to get our spiritual house in order. Scripture says we do not know the day or the hour when Jesus is coming back and we need to live each day as if he could come back at any moment (Matthew 24:36). During the season of Lent, there is tremendous grace to draw closer to Christ through our sacrifices.

Why sacrifice? What does it do?

I think there can be a lot of misunderstanding regarding sacrifice. After all, scripture does say that God does not desire or need our sacrifices (Psalm 40). Some might also think offering sacrifices is like striving to earn God's approval instead of receiving his grace.

I like the analogy of a child who doesn't want to eat his broccoli. The parent might then coax the child by saying, "Will you do it for me?"

Lent is a time to fast. Fasting is a way to cleanse our spiritual palate and make more room for more of God. Fasting creates more of a hunger for God and helps us to value the Lord alone as our banquet!

This season of Lent, let us not be caught off guard or unprepared! Let us take advantage of all the graces available through fasting, sacrifice and prayer to draw closer to Jesus!
Posted by Lisa at 8:54 AM