Arrows in the Lord's Quiver 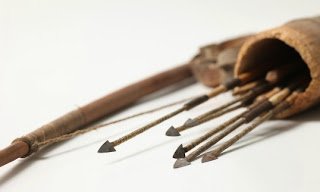 Right now, some of you are experiencing the Lord drawing you to himself. You have been like an arrow hidden in the Lord's quiver as you respond to the call, "Come away with me, my Beloved!" You have been called to a place of intimacy. Like an arrow being drawn back in a bow, you are being drawn back into the heart of Jesus. You are called to stay there and drink from his life giving waters until the right moment when he releases you.

Like the scene from the movie, "Brave Heart", where the enemy is coming closer and closer, but Mel Gibson's character, William Wallace shouts, "HOLD!" as everyone draws back their arrows, you are being drawn back into the Lord.

Because they waited before acting, they had a much bigger impact and gained victory when they finally released their arrows.

In the same way, if we draw back into the Lord's heart, getting in touch with his heartbeat, we will have a much greater effect and will be able to hit the mark or bulls-eye more effectively when the Lord finally let's go.

When finally released, the fiery arrows of God's love will consume all those they come in contact with!

Isaiah 49: 1- 7 -  Listen to me, you islands; hear this, you distant nations: Before I was born the Lord called me; from my mother's womb he has spoken my name. He made my mouth like a sharpened sword, in the shadow of his hand he hid me; he made me into a polished arrow and concealed me in his quiver. He said to me, "You are my servant, Israel, in whom I will display my splendor."

Bullying at it's Worst

One thing I have been talking a lot about lately is the importance of knowing our true identity. It is important that we know who we are in Christ and we walk in the knowledge of that. Especially in this day and age, it is so important for Christians to be confident in who they are, who they are becoming and what they are called to do lest you be pulled in every direction. 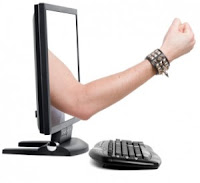 If you are on social media at all, it doesn't take long to encounter people trying to pit one group against another and bullying others into activism. Even fellow Christians are partaking in this form of bullying.

If you are not confident in who you are in Christ, you could easily succumb to either being a victim of this kind of judgmentalism or join in with this type of judging of others. Somehow, even if you are not a part of either group pitted against each other, it could make you feel guilty for even being human when you read such rants. If you join in the conversation, it can feel like entering a den of vipers.

I don't know if I blogged about this before but the Lord once asked me if I wanted to be a fly on the wall and see the schemes of the enemy. What he ended up showing me was rather horrifying but to sum it up, the three biggest schemes of the enemy that the Lord showed me was to distract, cause anger, and cause division.

Perhaps it is time to step back and engage again in real life. It's time to be present to the ones closest to us.

Mother Theresa said, "If you want to change the world, go home and love your families."

Often, this is the place to start.

There are times in our lives where the Lord might call us to activism. There are other times in our life when we might be called to retreat, be still and grow in our relationship with Christ. And, in both seasons in life, we are called to love our neighbor, those closest to us, and everyone we come in contact with. That is the place to start. We change the world, one person at a time.

When called to action, often times actions speak louder and is more effective than words. Please don't project your own convictions and calling on others by judging them and looking down on them if they are not doing what you think they ought to do. You could actually be having the opposite effect.

It is easy to spout off judgments on Facebook or other forms of social media but it could do more harm than good.  There is a reason Jesus said to take the plank out of our own eye before looking at the speck in someone else's. Maybe we should pause and think about how our words will effect others. Will what we say cause a greater divide and fuel anger or will it bring about unity and peace?

Often we can have a greater impact if we are willing to practically love those around us by making little daily sacrifices than pointing out the sins in everyone else. Especially, if we are pitting one group of people against another, we are not advancing the Kingdom of God. All we are doing is feeding into anger and division.

We need to be discerning. Don't take on the false yoke of others or be bullied into action if the Lord is not calling you to action. Also don't join the mob mentality and attack. It is better to take a step back and respond to God's grace in a situation rather than be reactionary. Often times it is also better to give people the benefit of the doubt instead of being quick to judge.

The body of Christ has many parts. One day, I am sure, we will see the powerful things that happened as a result of cloistered nuns praying with great faith! I think we will be amazed that someone could actually have such an impact when they never even had a smart phone, access to the internet and never left their convent.


James 1:19-20 - Everyone should be quick to listen, slow to speak, and slow to anger. for man's anger does not bring about the righteousness that God desires.

Let's Not Be Puffer Fish! 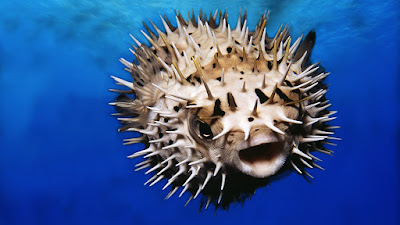 When Tom and I started and pastored a non-denominational church years ago, there was a young, single guy that joined us. When we came back to the Catholic Church, he followed, went through RCIA and became Catholic.

He is currently in Thailand as a missionary, fighting human trafficking. He works with a Protestant organization but greatly desires to partner with Catholics. Unfortunately, he hasn't had much luck finding Catholic groups over there to partner with. The reason is because most of the Catholic groups in Thailand, working with human trafficking victims are more into social justice and they don't see the need to evangelize; they don't see that the people would be better off if they knew Jesus instead of believing in Buddha, or their Hindu god. It is good that they want to take care of their physical needs, protect their dignity and rescue them from trafficking, but unfortunate that they do not see that true freedom only comes from knowing Jesus and having a relationship with him.

I do not know what the reason for this is, perhaps fear; fear of rocking the boat and offending people. I want to give these Catholic groups the benefit of doubt and think they somewhat know Christ but I seriously question whether they know him intimately.

Scripture talks about perfect love driving out all fear (1 John 4:8). Perfect love comes through knowing Christ intimately; not just knowing about him or having a superficial relationship where we hold back or hide some areas of our heart from the Lord.

We are called to give it all and open the door of every area of our heart to the Lord's sanctifying grace.

I believe St. Peter had a fear of intimacy with the Lord at first and that is what led to him denying Jesus three times during his passion as Peter succumbed to fear.

There are several things we see in scripture that would indicate that Peter may have had a fear of intimacy.

At the transfiguration, Peter tried to change the subject, suggesting they build tents, possibly because he wasn't willing to enter into the intimacy of the moment and fully receive what he was being shown (Matthew 17).

When Jesus was preparing to wash the disciples feet, Peter didn't want Jesus to wash his feet (John 13).

When Jesus appeared on the shore after his Resurrection, Peter clothed himself before jumping in the water to see Jesus (John 21). Could this represent trying to hide his soul and not letting Jesus see all of him?

After Jesus' death and Resurrection and before his Ascension, Jesus asked Peter three times if he loved him. By the third time, I think Peter finally got it, had an ah-ha moment and realized the Lord sees all things and nothing can be hidden from him. He then understood that what is most important is an intimate relationship with God and it is only out of this intimate relationship that we can perfectly love others.

Since Peter originally had a fear of intimacy and wouldn't let Jesus see everything about him and allow his perfect love to drive out all fear in his heart, he didn't have the fortitude to resist the temptation of denying Jesus when the pressure was on.

If we fail to have an intimate relationship with the Lord; hiding parts of our souls from him, we could actually do more harm than good. If we don't allow the Lord to love us perfectly, we will cave to fear when the pressure is intense; fear of man, fear of failure, fear of rejection, etc. This fear will make it nearly impossible to make ourselves vulnerable and love others. Instead we will try to defend ourselves and lash out at people.

That is what puffer fish do; when they become afraid and feel threatened, they puff up and can injure if you get too close.

As Catholics, we especially have an amazing opportunity through the Eucharist to enter into deeper intimacy with the Lord but we need to open our hearts to the graces that are available.

The Church needs people who will radically abandon themselves and allow Christ to thoroughly love them. When we are willing to enter into an intimate relationship with Christ, allowing the fire of his love to penetrate our hearts, we will be compelled to go out and share this love with others; radically loving them into the Kingdom even if it means dying for our faith!