I know I've been missing in action. I haven't felt very inspired to write. Lent was a little rough this year, so probably the perfect Lent. I had all kinds of grandiose plans but in the end none panned out. Instead I faced all kinds of temptations and a spiritual fog, hence the reason that I didn't blog.

It reminded me of how Jesus was baptized, filled with the Holy Spirit and then went into the desert and faced many temptations. That story actually encouraged me because I knew there was probably a light at the end of the tunnel.

A couple blogs ago, I talked about how I had a very profound encounter with the Holy Spirit at the Encounter conference the beginning of January. Afterwards I felt empowered and emboldened to share the Gospel with people. Also, in February Tom and I were speakers at a marriage retreat on a cruise ship. God was very faithful and I believe spoke through us and blessed the people we ministered to.

Soon after we came home, we entered into Lent and that is when the distractions, fog and temptations started, at least for myself.

The first temptation I dealt with was discouragement and depression. It was strange because it obviously was an oppression coming from the outside and pressing down instead of within me. It was easy to see it for what it was and after about a week, I took authority over it, it went away and fortunately I never let it take root in me.

With the 2nd temptation, I can't say the same. The 2nd temptation was regret. Thoughts regarding past failures were entering my mind and I found myself entertaining them and them causing me great sadness. One particular night I was overcome with grief over past mistakes and wondering, "what if I had done certain things differently". I ended up having a dream that night where the Lord warned me that giving into regret might seem harmless at first but it could end up being very dangerous and I needed to take authority and claim victory in Christ's redeeming work. That next morning, that is exactly what I did and that temptation left me.

Another week in Lent I dealt with one of the worst flare-ups with Fibromyalgia and Bursitis that I have had in a long time. Through that, I had to fight off feelings of worthlessness as the fatigue at times was overwhelming.

Thanks be to God we are now in the Easter season! 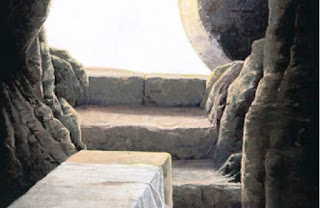 Just a side note; There was one year, I regretted not taking more advantage of the graces during Lent and I felt like the Lord said to me, "There is even more grace available with the Resurrection!"

So, if you are that person this year, know that Easter lasts longer than Lent and there are even more graces available to you!

I have already experienced the grace of this Easter season. The fog is lifting! The veil has been removed! I am back to having prophetic experiences and  encounters with Jesus! That is our inheritance!

Like I said before, I did not have the Lent that I wanted but I think God had his way and knew what would bring the greatest results and now I can more fully enter into the joy of Easter!

James 1:2-4 - Consider it pure joy, my brothers and sisters, whenever you face trials of many kinds, because you know that the testing of your faith produces perseverance.  Let perseverance finish its work so that you may be mature and complete, not lacking anything.