The Banqueting Table of Mercy

Why don't we see these things more often? I wonder if the problem is on our end and not God's.

Tom and I were big fans and followers of the late John Wimber. We have all his books which are out of print now. In his book, Power Healing Wimber talks about praying for many healings before he started witnessing a single healing. The reason he kept praying for healing for people is because it was biblical and he was trying to be obedient to what he felt convicted in scripture to do.

The turning point for him was when he was called to come over to a man's house to pray for his sick wife. The man had been out of work for some time and finally had a job interview. His wife however came down with the flu and couldn't take care of their children. The man called John and asked him to come over and pray for his wife to be healed so he could make it to the job interview. On the way over to the man's house, John was nervous. His thought process was, "Man, they really believe this stuff!". He arrived nervously, prayed over the man's sick wife and then turned to explain to the man why sometimes people are not healed. He noticed the man's eyes got big, John turned around and the woman was out of bed, completely healed!

When John drove away from the house he said to God, "You got one!!!"  Next thing he knew, he started seeing an open vision. He had to actually pull over to the side of the road because it was so distracting. The vision was of a big honeycomb dripping with honey. The honey was landing on people. Some received it and some brushed it off out of annoyance. He prayed about this and the Lord said, "John, my mercy is there, you need to learn how to position yourself under it. The problem isn't on My end. Don't beg me for healing again!"

I think the reason we don't see more healing, miracles, provision and just everyday blessings in our lives is because we have a distorted view of God. We don't see him as a loving Father who gives good gifts to his children. We have a poverty and orphan mindset. Instead of being confident in our relationship with him and sitting with him in high places, eating from his banqueting table, we beg him for the scraps that fall under the table.

Now, I'm not saying that every person we pray for should get healed. We all need to die at some point. Even Wimber recognized that some sickness is unto death and he would ask the Lord before praying with someone if it was a sickness unto death. If he felt it was, then he would pray in a different direction and pray for peace for the person and their family.

If we at least want to see some people healed that we pray for however, I believe it starts with having the right mindset and seeing God as he truly is.

I think to get a good idea of the type of God we serve, we can look at the female pelican. If a mother pelican doesn't have any food to feed her hungry babies, she will tear at her own flesh and feed her own flesh to her babies.

That is the kind of God we serve! He would rather suffer himself than see us suffer! He not only died a gruesome death for us but he gives us his flesh and blood to eat in the Eucharist! He has given us everything! He has never held back and he never will hold back from us! His mercy is abundant and overflowing!

All we need to do is position ourselves to receive! 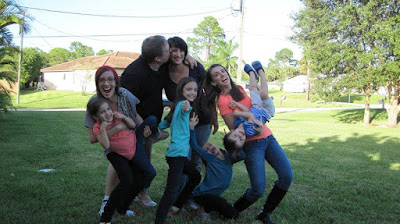 I was at a surprise birthday party last week for a friend. Children were welcome so we brought 4 of our 6 kids. A woman there saw me smiling and she commented, "How can you still be smiling when you have so many kids?!" Without even thinking, I replied, "Its because I have so many kids that I'm smiling!"

This got me thinking about the culture in which we live in. According to the CDC, birthrates have dipped to a 30 year low and fertility rates have sunk below replacement levels. I believe the reason for this is because we have put our careers and material possessions above having children. Society often considers children to be more of a burden and hindrance to achieving our goals. We can often be narcissistic and self-seeking. I know I have been guilty of thinking this way as well. The only reason I went on to have 6 children is because of the Lord's promptings. Without that, I don't know if I would have had the forbearance so I'm not judging anybody. I would like to challenge however!

Tom and I just celebrated our 25th wedding anniversary. Before we got married, I wanted to be a missionary. We got pregnant with our first child on our honeymoon. A marriage that includes children is practically all we know. Still, I didn't always see my vocation as a mission field.  When my older two were little, I couldn't wait for them to get a little older so I could finally do what God was calling me to do. Then the Lord called me to have 4 more. Some days I even resented that Tom got to be involved with ministry opportunities while I was "stuck" home with the kids.

I believe one reason we are on this planet is so we can be perfected in love. The best and most effective way for that to happen is through sacrifice and sometimes suffering. It is only through our time on this earth that that is possible since in heaven there will be no more suffering or opportunities to sacrifice for others.

What I have come to discover over the years is that our children can actually help us to be perfected in love, grow in holiness and teach us something about the nature of God. Also, our children do not have to hinder us from achieving our goals but we can actually achieve our goals within the context of family.

I am currently reading Jennifer Fulwiler's new book, One Beautiful Dream in which she talks about fulfilling her dreams within the context of family. A turning point for her was when she went on a retreat and talked to a priest about her desires. He told her something that was life changing! He said, "Where there is no unity, there is no God. God is always calling us to connection, to unity, and if we don't have that, we are not walking with God. Do this work that God is calling you to do, but do it as one part of something bigger - your family." He went on to tell Jennifer, "We always think like individuals, like the work that we do has nothing to do with anyone else. God wants us to see what we do as just one small part of something greater..."

Unfortunately in our culture, we often tend to think individualistically. There are other cultures that have this down better and have the right mindset that everything they do is out of the context of the family instead of the other way around.

Finally after all these years, I think my mindset is changing for the better. I am starting to even see how I can learn from my children. If we listen and pay attention I think they can teach us so much!

Reflecting, I can think of more than a few things my children have taught me over the years. My older two girls have taught me to recognize the beauty of Catholicism. They did not grow up with the Catholic faith. We came back to the Church when they were 11 and 13. They ended up falling in love with the beauty that pointed to the presence of God they experienced there. My 12 year old daughter has taught me that we all have our crosses and through the power of the Holy Spirit we can overcome anything! My 9 year old daughter teaches me everyday how to be more sensitive to the Holy Spirit. She teaches me that He cares about even the littlest details of everyday life. My 8 year old daughter has taught me that ultimately we are made for Heaven and God is the only one that can give us true joy! Last but not least, my 5 year old son is teaching me that you get better results by responding to God's grace instead of reacting to negative behavior.

I look forward to seeing what the Lord has yet to teach me through my children and how I can partner with them in Christ to reach those around me!
Posted by Lisa at 7:36 AM No comments: