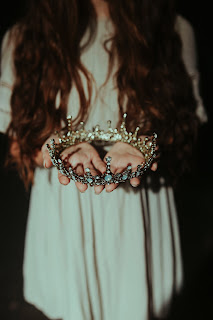 My husband and I are co-directors of the Indianapolis satellite campus for Encounter Ministries. In our first quarter of the school we teach about one's identity in Christ. It is important that we know who we are and whose we are. If we are believers in Jesus, we are his children. If we are his children, we are sons and daughters of the King. If we are sons and daughters of the King, then we are co-heirs with Christ. Everything he has, is also ours. How exciting is that!

For a while now, I believe the Lord has been preparing his people for a greater glory. He has been preparing his people to have the ability to carry the weight of His glory that is coming. This will usher in the greatest move of His Spirit that we have ever seen and will be glorious to be a part of it! It will start with laid down lovers of God that loved him more than their own lives; People that realize that He is enough.

There was a time in my walk with the Lord that I was weary of all the spiritual warfare I was undergoing. At the time, I did not have a clear understanding of my identity as a daughter of the King. Instead of walking in my authority, I asked the Lord for a way out. I told him I just wanted a nice, leisurely life. He granted my wish and left me alone. For four long years, I did not feel his presence and I did not hear his voice. I was miserable and ended up repenting. In his mercy, he restored me. I am now very careful to abide in him, realizing that he is enough and my everything!

At the time, I didn't understand why the 1 Peter scripture was thrown in there. I think I have even left that part out when talking about the word in the past. I have since come to understand. Royal, means we are children of the King and royalty ourselves. To be a priest, one offers sacrifice. By our baptism, we are priests, prophets and kings. To be a royal priest, is a call to offer sacrifice by laying down our crowns.

In this season, as part of the preparation for a greater glory and as a way to get ready, I believe the Lord is asking his children to lay down their crowns; be willing to lay down their rights and their inheritance.  As sons and daughters of God, we are co-heirs and have many freedoms and rights. Are we however, willing to lay down our rights without any other expectation than more of God because, he is enough?! He will not disappoint! In exchange he wants to give us a greater glory, beyond what we could have imagined!

2 Corinthians 3:18, 4:7-12, 16-18 - "And we all, who with unveiled faces contemplate the Lord's glory, are being transformed into his image with ever-increasing glory, which comes from the Lord, who is the Spirit. But we have this treasure in jars of clay to show that this all-surpassing power is from God and not from us.  We are hard pressed on every side, but not crushed; perplexed, but not in despair;  persecuted, but not abandoned; struck down, but not destroyed.  We always carry around in our body the death of Jesus, so that the life of Jesus may also be revealed in our body.  For we who are alive are always being given over to death for Jesus’ sake, so that his life may also be revealed in our mortal body. So then, death is at work in us, but life is at work in you.Therefore we do not lose heart. Though outwardly we are wasting away, yet inwardly we are being renewed day by day. For our light and momentary troubles are achieving for us an eternal glory that far outweighs them all. So we fix our eyes not on what is seen, but on what is unseen, since what is seen is temporary, but what is unseen is eternal."

The Pearl of Great Price 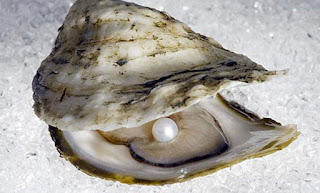 Very truly I tell you, unless a kernel of wheat dies, it remains a single seed, but if it dies, it produces many seeds. - John 12:24

Recently, I was in prayer and I  saw something really gross. It looked like raw flesh. My first thought was, "This can't be God." and then I realized it was inside an oyster shell. I thought about how dark it would be, how bad it would smell, how claustrophobic it would feel. I then realized that sums up part of my life right now. Isn't that always our first thought though, when uncomfortable situations happen in our life, "This cannot be God!"?

To get into the details of everything that has taken place in the last 4 years, wouldn't do it justice. I have had to die to dreams, even good ones; dreams for my children and for myself; basic dreams of my children just being able to attend or even do school, any school; dreams for everyone to be healthy and whole.

If you can relate to what I am saying, I think one thing the Lord is doing, is messing with the status quo. Let me explain. In society, are we in bondage to the way things have always been done or are we truly looking outside the box of life's possibilities? I remember a word the Lord gave me over 20 years ago. He said there was going to be a reversal of the order of how things are now. That can only happen if there is a shift in mindsets and our current ways of thinking.

For I know the plans I have for you, declares the Lord, plans to prosper you and not to harm you, plans to give you hope and a future. - Jeremiah 29:11

Recently, I had a dream. In the dream, I was tied up on the side of a cruise ship. I was stuck and could not move as everyone else was getting off. I knew in my dream, I had a choice to make; I could either panic because of the situation I was in or I could choose to worship. I chose to worship.

Even though I am in the coffin of an oyster shell, I choose to be still and worship, knowing something beautiful is being formed. I choose to stay here until the work is complete and at the same time, hoping and having faith that there is more, both in the physical and spiritual.

The pearl of great price is no joke, but it is worth it!