A person is a person, no matter how small 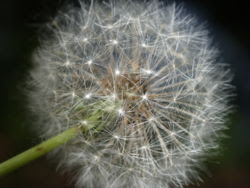 I have been thinking lately about the beauty and sacredness of life.  Especially human life, made in the image and likeness of God. I have been contemplating the beginnings of human life. None of us would even be here if God did not love us into existence! We start out the size of a poppy seed and although we are that small, God breathes his life into us.  Since he is so big and we are so small and fragile, he has to be ever so gentle. I imagine it would be the way a gentle breeze carries a dandelion without the petals falling off. This human life, once it is started will also go on to live into eternity.

Life is such a precious gift and it is such a privilege to be able to help bring about new life. The older I have gotten, the more I have realized my fertility is a gift and it will run out. I also have friends who are not able to have children. Tom and I have always tried to be sensitive in prayer to how many children the Lord is calling us to have and the timing that they should be conceived.  Society thinks this is foolish and even irresponsible. There are even some Christians that think it is legalistic. I am not a very disciplined person, and actually pretty weak. I also am not naturally virtuous. The only thing I can claim is that I have always tried to be obedient to God in every area of my life and even that is only by his grace.

Update: When I wrote this post I was actually pregnant.  I recently miscarried at 9 weeks. That gentle breeze carried our baby up to Heaven.  From the start of this pregnancy I had a real sense of the sacredness of this life.  I believe it was the Lord showing me the importance of every life, no matter how short. The reason Tom and I have been open to new life has always been primarily out of obedience to the Lord because I have very hard pregnancies. My children are a gift from him but they also ultimately belong to him and it is up to him to do with them as he sees best. After my miscarriage I was meditating on Mary's yes.  I'm sure when she said yes, her dreams for her son did not involve him being crucified. The same day I read this quote from a book called "Having a Mary Spirit" by Joanna Weaver:  "...saying yes to God brings blessing, but it can also bring pain.  That's why we need a submitted heart that keeps on believing...even when it hurts."

Email ThisBlogThis!Share to TwitterShare to FacebookShare to Pinterest
Labels: miscarriage

Most of the time when I am in prayer it is spent in meditation, contemplation and intercession.  I rarely ask the Lord questions but I find when I do I almost always receive an answer.  I don't know why but I often do not expect an answer and I don't always recognize the revelation I receive as a direct response to my question. That happened to me a few weeks ago.

Before I tell you what my question was, let me clarify that I am 110% pro-life.  I see it as a grave evil and a spiritual battle.  I believe that Satan, through the act of abortion would like to kill as many of these innocent lives as he can because nothing reflects God better than an innocent baby made in his image and likeness. I believe these babies therefore are little martyrs that go to heaven. My heart in the matter has always been very grievous, especially for the mother.  I often feel led to intercede for these women who are damaging themselves psychologically and spiritually through such an unnatural act as to kill their own child. Not to mention that they are rejecting such a precious gift. I know women who have had abortions and at the time they did not fully realize what they were doing but later deeply regretted it and said it was the worst decision they had ever made.  Fortunately, the women I know have taken it to the cross and have received God's mercy.  There are other women however that will try to escape the pain of what they have done by escaping through drug and alcohol use and all around continuing to make unhealthy decisions.  There are always repercussions.

So, here was my question:  I told the Lord that I knew abortion was intrinsically wrong but if the babies go straight to heaven, give me understanding on how the babies suffer and how it would have been better for them to live here on  earth. Ultimately I knew it would be better but I felt I needed understanding as to how. After all, some might have decided to reject God in this life. I might have a strange way of thinking but if people are honest some might admit they have had the same question.

A few weeks later, I had a vision that I did not see as an answer to my question until recently.  It was a vision of Mary unlike any statue or picture I have ever seen of her.  In the vision she was very youthful, smiling and wearing a midnight blue cloak.  Her hair was flowing under her veil and the cloak had twinkling stars all over it. I then watched as the twinkling stars would come off her cloak and form into butterflies which were the same color midnight blue as her cloak and trimmed in black.  Mary was kneeling down, playing with the butterflies, letting them land on her finger and taking great delight in them. I also had the understanding that I was one of those butterflies. 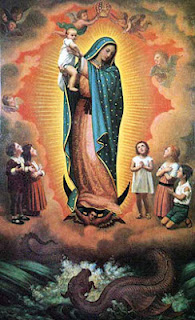 I didn't fully know what the vision meant until I was at a conference with Dr. Peter Kreeft. His morning talk was entitled "Why Pro-Life?" During his talk he happened to mention Our Lady of Guadalupe and how she is the patroness of the Americas and we should ask for her intercession to end abortion.  He then mentioned how in the picture of her, she is standing on the moon just like the woman in the book of Revelation and the woman in Genesis that crushes the head of Satan. The moon for the Aztecs was the god of night. Mary standing on the moon shows that her obedience to God conqueres darkness. This is a spiritual battle and she is the one to intercede to end abortion.  He then gave a history of Our Lady of Guadalupe.  Because of her appearance to Juan Diego and the miraculous image that appeared on his cloak, millions of Aztec Indians converted to Christianity. The Aztec Indians were known for sacrificing their babies to the pagan gods and millions were sacrificed.

It then hit me that the Lord was answering my question about abortion when he gave me that image of Mary and the image I had of her was actually Our Lady of Guadalupe.  Just like Our Lady of Guadalupe she had a blue cloak with stars all over it.  I then realized that the real tragedy behind these little lives being cut short through the act of abortion is they are not given the opportunity like we have, to be transformed like butterflies into the image of Christ by sharing in his life, suffering, death and resurrection. It also reminded me of a quote by St. Padre Pio, "The angels are jealous of us because they cannot suffer" and thus join in Christ's sufferings for the Church and one another. We shouldn't take for granted that we have the opportunity to grow in love and express our love for others through sacrifice. "Greater love has no one than this: to lay down one's life for one's friends" - John 15:13.

Let us call upon Our Lady of Guadalupe to intercede for the lives of the unborn that they will be given the opportunity to live and grow in the knowledge of God! Let us also pray that we may be transformed by the trials and tribulations of this life into beautiful butterflies. Our Lady takes great delight in a soul that is fully committed to Christ and is willing to be transformed into his image!