Christians often like to say that God will not give you more than you can handle. They are well meaning people who usually like to say this to someone who is going through a tough time. Personally, I do not find these words encouraging. I think this idea comes from the scripture about God not testing us beyond our strength (1Cor.10:13). However, I see these as two different things. In my own life, I know that God has often given me more than I could handle. The reason however is so that I will learn to lean back in him and rely on his grace. I think if we limit ourselves to the things we think we can handle, we could really be missing out in life and limiting God.

One area I have personally been stretched is in the area of bearing children. I have very difficult and complicated pregnancies with gestational diabetes and usually preterm labor that results in bedrest. With my second pregnancy I was on bed rest for 5 months. After I have a baby, it also sends me into a flareup with a couple health conditions that results in extreme muscle and joint pain for 12 months. If I would have gone off of what I thought I could handle and what seemed logical, I would only have two children right now. However, God had other plans.

Twenty years ago this past Thanksgiving, I was engaged to be married. I was in prayer and a very clear image came to my mind. I saw myself in a hospital room. I could see the bright lights and the doctor and nurses in their scrubs. I then saw myself giving birth to a baby. The next thing I saw were two giant hands coming down from heaven and handing me a baby boy.

I had made the mistake at the time of telling a few friends about my vision. In their attempts to encourage me they told me maybe it was just symbolic or maybe we were supposed to adopt a boy. I knew in my heart however that this was supposed to be a biological child that we would have.

Eight years later we got up the courage to put aside the NFP charts that we were using to avoid a pregnancy and try to conceive again, thinking surely this time it would be the boy that God had promised us. Instead we were again blessed with another beautiful baby girl.

By now I was considered advanced maternal age and I knew the clock was ticking for us to have the baby that God had promised us. Surely this would be it and I wouldn't be expected to endure another rough pregnancy. I ended up have two more beautiful little girls and then a miscarriage.

I must say, I never felt like I "needed" a boy. I was perfectly content with my girls and felt very blessed. We just wanted to do God's will and see his promise fulfilled. In June of 2012 we got up the courage to try one more time and conceived right away. I had my 20 week ultrasound scheduled. I was a nervous wreck beforehand. I knew I needed to surrender to whatever was God's will and have peace with whatever the gender of this baby would be. By God's grace, I was able to do that and the day of the ultrasound I had peace. Our perseverance ended up paying  off! I was told we were having a boy! We were ecstatic and excited that we were finally seeing the fulfillment of  God's promise to us. We decided through prayer that our son's name would be Isaac because he was the son of God's promise to us. On January 21, 2013, little Isaac Francis was born! The Lord is faithful to his promises! What is even more important sometimes than seeing the fulfillment of the Lord's promises is that we learn patient endurance and perseverance which leads to the perfecting of our faith which is more precious than gold. The lessons I was taught through the waiting and persevering were invaluable! 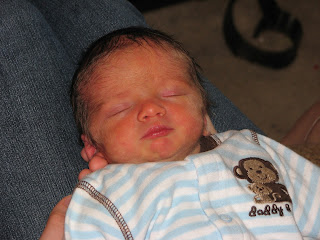 James 1:2-4, "Consider it pure joy, my brothers, whenever you face trials of many kinds, because you know that the testing of your faith develops perseverance. Perseverance must finish its work so that you may be mature and complete, not lacking anything."

Romans 5:3-5, "...we rejoice in the hope of the glory of God. Not only so, but we also rejoice in our sufferings, because we know that suffering produces perseverance; perseverance, character; and character, hope. And hope does not disappoint us, because God has poured out his love into our hearts by the Holy Spirit, whom he has given us."
Posted by Lisa at 12:24 PM 1 comment: