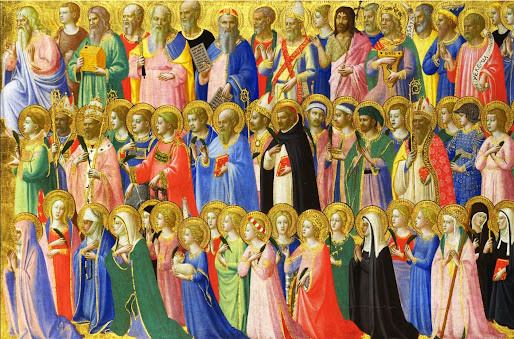 For over 20 years, the Lord has been showing me a great move of God that is coming. Many prophetic people have also seen this move. What the Lord said to me 20+ years ago is, "You are about to witness the greatest move of my Spirit that has ever been poured out on the earth. Unlike the Charismatic renewal, it will not be able to be contained."

Now, I will be honest, there is a good chance that this move is going to coincide with persecution in the world, but where sin abounds, grace abounds even more (Romans 5:20).

Recently the Lord showed me more about this move of God. He showed me that there is a baptism of the Holy Spirit that we have not yet seen or experienced. The next move of God is going to start with this baptism. This baptism is going to involve wine of the Holy Spirit mixed with oil that has been pressed from the lives of the Saints that have gone before us. I'm not just talking about big 'S' saints but there are many unknown followers of Jesus that have also laid down their lives, either physically in martyrdom or spiritually. Scripture says of them in Revelation 12:11 - They loved not their lives even unto death.

I am now going to borrow a great teaching my husband does about the communion of saints. In Hebrews 12:1 it says, we are surrounded by a great cloud of witnesses. The word surrounded in the Greek is perikeimai. Basically, it means to be connected or joined to. Think of a 3-legged race.

Since the saints are connected to us, they do not receive their full reward until we complete our race. And, since we are also connected to them, we benefit from the way they already laid their lives down for Christ.

Think St. Stephen. As he was being stoned and martyred, he saw an open Heaven. Because of the merits of what he did, we will also see an open Heaven in this next move.

Revelation 6:9 says, '"...I saw under the altar the souls who had been slaughtered for the word of God and for their testimony they had given; they cried in a loud voice, "Sovereign Lord, holy and true, how long will it be before you judge and avenge our blood on the inhabitants of the earth?" They were each given a white robe and told to rest a little longer, until the numbers would be complete, both of their fellow servants and of their brothers and sisters, who were soon to be killed as they themselves had been killed."'

So, what I also believe the Lord showed me  is, just like the wedding at Cana, the best wine is being saved for last. This wine has been fermenting for over 2000 years and is mixed with oil pressed from the lives of the saints.

This wine is about to be poured out. For those who have surrendered their lives to the Jesus, it will be Glorious! This baptism that involves wine from the Holy Spirit and oil from the saints is going to result in an open Heaven, Heavenly encounters and unprecedented miracles. This will empower God's people to be salt on the earth and bring in the harvest!

This oil is going to be worth giving up everything else and purchasing!

Today is the first day of the Jewish feast of Hanukkah. It lasts until December 18th. Traditionally, it commemorates the rededication of the Temple in Jerusalem after it was won back by Jewish warriors from Syrians who desecrated it. It is also known as the Festival of lights and celebrates the triumph of light over darkness. After taking back the temple, the Jewish people had an eight-day celebration where they rededicated the temple. Tradition has it that they only had enough consecrated oil to light the candelabra for one day but it miraculously lasted eight days.

I felt there was a special significance about it, especially for this year. I believe there is also significance that there is going to be a special Christmas star that will be observable for the first time in 800 years on December 21st.

The Lord wants us to get ready for and expect the miraculous! We are about to see a significant turn of events that will result in the triumph of light over darkness in the world.

The Jewish people rededicated the physical temple. The way we can get ready is by rededicating our own temples; our bodies, soul and spirit, to the Lord. Hold nothing back! Give him everything!

This does not mean we have to have it all together. This also does not mean what we give him needs to be elaborate. Think 'Little Drummer Boy'. Everything we have is from the Lord anyway. All he is asking is we offer back the very things we have been given. In exchange, we receive even more.

Like the parable of the wise virgins, we are called to keep oil in our lamps (Matthew 25). The oil ultimately comes from God. We receive that oil by receiving the life of Christ inside us. We receive the oil by allowing Christ to make a home in our hearts through an intimate relationship with him.

We in turn pour that oil out like Mary at the feet of Jesus (John 12:3), making a fragrant offering to the Lord. However, he cannot be outdone. He in turn pours the oil out on us overabundantly!

Recently, in prayer, I saw an oil can with Heavenly oil being poured out. Here is the sense I had with it:

During this season of trial that we have been in, many of God's people have been pressing in for more of God's presence and intimacy with Him. This is paying off! The Heavens are opening and oil from Heaven is being poured out! Where once revelation and healings were harder to obtain, these things are becoming much easier and more commonplace. The veil between Heaven and earth is becoming much thinner and Heavenly encounters more accessible!

Get ready! Like a great Tsunami wave, we are about to witness the greatest move of God's Spirit that has ever been poured out on the earth! We are about to also see a great harvest of souls come into the Kingdom! Get ready for the miraculous and oil from Heaven!