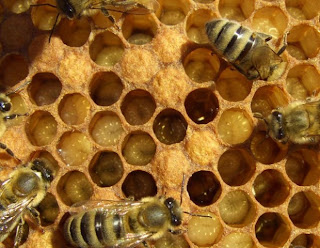 It was 1998 and a typical dreary day in Kalamazoo, Michigan.  My older two daughters were around the ages of two and four. Once again I was stuck on the couch dealing with a debilitating fatigue and muscle weakness. I had a hard time even taking care of the basic needs of my little girls.  This was before I knew I had an autoimmune condition so part of me just thought I was being lazy.  What I did know however was that I didn't have the strength to even lift myself off the couch so I decided to make the best of the situation and meditate on the Lord.

This time as I was meditating on him, three images came to my mind.  I saw a spider, a grasshopper, and a bee.  I felt like the Lord asked me which I'd rather be like.  I thought about it and realized a spider just kills pesky insects. A grasshopper destroys crops.  A bee however gets to provide something good for society and make honey.  I told the Lord I would rather be like the bee.  I then felt like he said, "Bees lie dormant for a time before they get to make honey."  I did not realize this about bees so I did a little research and sure enough, I discovered that the baby larvae bees lie dormant in the honey comb before they are mature enough to come out and start making honey.