Resurrecting the Titanic May not be a Good Idea!

I had a dream last week about the Titanic. In my dream, the Titanic had been recovered and brought to the surface. It was about to be restored and people were going to be given the opportunity to live on it. I was touring the wreckage and as I was touring it I was thinking, "I'm not sure this is a good idea." The first reason I was thinking this is because, if we are aware of history, we know that part of the reason the Titanic sank is because of arrogant people that thought it was unsinkable. In my opinion, it didn't seem like something that should be resurrected and reused. The second reason I didn't think it would be a good idea to live on the Titanic is because, even if it was restored, it would still contain the memories of all the innocent people that had died. 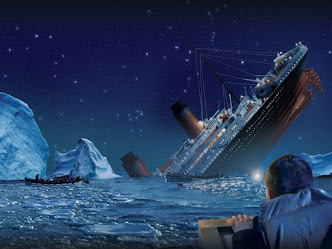 I also had a vision that I feel goes along with that dream. In the vision, I saw "kings of the earth" seated high up in a circle on thrones that looked like hands. Unaware to them, these throne hands were sitting on one giant hand. I then saw the giant hand close into a fist.

When I had the vision, a couple scriptures also came to my mind. The first scripture comes from 2Cor.10:5 (paraphrased). I heard, "Every high and lofty thought that has exalted itself above the knowledge of God is going to be brought low."

Isaiah 40 also came to me - "Every valley shall be lifted up, and every mountain and hill made low, the uneven ground shall become level and the rough places a plain. Then the glory of the Lord will be revealed and all the people shall see it together, for the mouth of the Lord has spoken."

So, what does all this mean? I believe the Lord is showing me, there are leaders on the earth who have exalted themselves above the knowledge of God. They do not realize that the only way they are in the positions they are in is because God has allowed it. They also have not learned from history. Feeling comfortable in their positions, they are going to become lax. They are going to over play their hand and their true colors are going to be revealed. The Lord is only going to tolerate this for so long and then will enact judgement because of the innocent that would suffer due to their arrogant and tyrannical leadership.

As I did back in June, I again heard the Lord laugh and quote Psalm 2:1 - "Why do the nations rage and why do the people plot in vain?"

I also heard him say, "Do they not realize that all their efforts are going to be brought to nothing because I am about to move!"