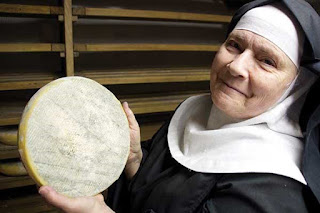 My husband and I watched an episode of a show called “Cooked” last week. In this particular episode, there was a nun who was an expert in making cheese. She made the cheese in an ancient way, in a big wooden barrel. The FDA had a problem with this. They wanted her to make it in a pure, stainless steel drum.

This is also how wine is sometimes still made and has been made for thousands of years.

We often think the modern way of doing things is best and the more sterile the conditions, the better. In ancient times, however, they understood the health benefits of fermentation of certain foods and drinks. They knew the importance of having good bacteria to bring about that fermentation process.

Let me propose something to you. Even the greatest of Saints were still sinners. They are Saints because they loved God with their whole heart and embraced the wooden Cross of Christ. Therefore, they became like that good bacteria in the wooden barrel, killing the bad bacteria (sin and darkness) by their sacrificial love of Christ and their willingness to lose their own life in order to find it.

People have been saying for a couple years now that God is going to do something new and is about to pour out new wine. It is true that it is a wine that we have never seen before but it is not new. Actually it is ancient. It is a wine that is made up of the prayers of the saints, sacrifices and blood of the martyrs. It is a wine that has been fermenting for over 2000 years, since the first Pentecost! 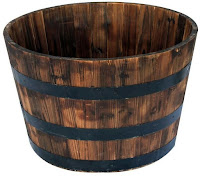 The Lord is building an army. This army will cross denominational lines. The ones who will lead this army have been growing in deep, intimate relationships with Jesus; They have been willing to lay down their own lives and be set on fire with His love. They have yielded to God and have allowed Him to work on and transform their hearts. They are willing to be baptized with the baptism of fire (Matthew 3:11). They will be known as the burning ones. This burning will spread like wildfire to the rest of the army. This army is going to be used to pour out the barrels of ancient wine.

To be part of this army is going to require blind trust and walking closely in the footsteps of Jesus. It might even look foolish at first to others but if they will keep their eyes on Jesus, He will lead them and impart to them the faith that they will need to partner with him in the pouring out of this ancient but new wine.

Let the cry of our heart be, “Make me into a burning one in your army, God!!”

John 2:10 - “Everyone brings out the choice wine first and then the cheaper wine after the guests have had too much to drink; but you have saved the best till now.”

Joel 2:2 - “...Like dawn spreading across the mountains a large and mighty army comes, such as never was of old nor ever will be in ages to come. Before them fire devours, behind them a flame blazes. Before them the land is like the garden of Eden, behind them, a desert waste - nothing escapes them. They have the appearance of horses; they gallop along like cavalry. With a noise like that of chariots they leap over the mountaintops, like a crackling fire consuming stubble, like a mighty army drawn up for battle….”
Posted by Lisa at 2:42 PM