The Grace of the Resurrection 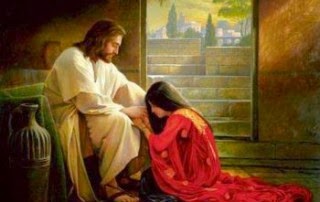 I hope everyone is having a wonderful Easter and had a blessed Lent! One year I was feeling sad at Easter because I felt like I could have done a better job taking advantage of the grace available during
Lent. The Lord encouraged me however and told me, "There is even more grace available with the Resurrection!" So, if you are one of those persons who could have taken advantage of more of grace during Lent, you have another chance during this Easter season!

Divine Mercy Sunday
I had an interesting thing happen this past Sunday. Right after Mass on Divine Mercy Sunday, we stopped at our local grocery store to pick up some lunch food. I was at the deli counter and right in front of me a fight almost broke out. There was a man in line but he did not get a number. Another man came along, got a number and right after, his number was called. Well the guy that did not get a number was ticked because he was there first. He started calling the other man, who by the way was elderly, all kinds of names and told him he deserved a punch in the face and he even aggressively rubbed up against him. I was very impressed at how the elderly man handled himself. He just kind of smiled at the other man and didn't try defend himself or fight back. Meanwhile, I was right in back of them with tears welling up in my eyes. I had just left Mass, was very moved when I received Jesus in the Eucharist and then encountered this unsettling scene. That was just a small glimpse into the sins people commit everyday. Further proof that the mercy of God is a bottomless ocean since he sees everything and doesn't decide to annihilate us all!

Faith Alone
I have picked up on the fact that there seems to be an overwhelming presumption among many Protestants that Catholics think they are saved by their works. Some of these Protestants feel that it is their duty to clarify to Catholics that "It is by grace through faith alone that we are saved and is a free gift!", as they quote Ephesians 2:8.  First of all, I do not see the word "alone" when I read that passage. Secondly, I find this very ironic because often times these same Protestants believe that children are not "saved" and can not be baptized until they can vocally profess faith in Christ. If it is by grace and a free gift, then wouldn't it make sense to allow even a baby who can not do anything to have it too?! Instead that child has to do something, like say, walk down an aisle as they respond to an altar call to get it? Also, how do these same Protestants reconcile passages like James 2 that talks about faith without works is dead and Acts 16 that says your whole household will be saved? And for those of the "once saved, always saved" camp, how do they interpret Philippians 2 that says we need to work out our salvation with fear and trembling?