Last night I had the privilege of giving a talk at my church on hearing the voice of God in our lives. This is a topic I am very passionate about! 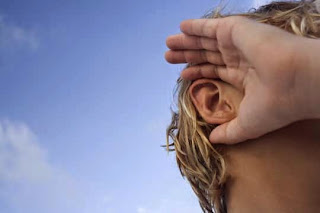 When I was eighteen, I actually stopped believing in God because I figured if there was a God then he should be able to speak to me and since I didn't hear him speaking, he must not exist. At the age of nineteen, the Lord revealed himself to me in a powerful way! I discovered that he does know and care about us on a personal level and he does speak to his people. He saved me from a life of sin and despair and I couldn't wait to show him how grateful I was! I got involved in every ministry I possibly could and became VERY busy. Looking back, I was actually running way ahead of him and there were times he was trying to get my attention but I wasn't listening.

One such occasion that really stands out was a time I was actually praying alone in my room instead of on the go like usual. A word came to me that something was going to happen to my car, it would be on a Wednesday and it would be on the way to church. I thought that was odd because Wednesday was the only day I wasn't at the church. That next Wednesday came and went and nothing happened so I forgot about that word. Shortly after that, the youth minister at the church I attended asked me to be on the leadership team and they were going to start meeting on Wednesdays. I said yes, but did not remember the word the Lord gave me. The first Wednesday leadership meeting day was hectic to say the least. I went to community college in the morning, worked in the afternoon and then was rushing to make it to the meeting in the evening. The church was about thirty minutes away and I was speeding down a busy highway during rush hour traffic, trying to make it there on time. I still did not remember the word that came to me that day in prayer but for some reason I felt uneasy in my spirit so I was praying the whole time in the car. All of a sudden my car went from about 75 miles an hour to 20 in a matter of seconds. I also lost control and my car was swerving all over the road and finally came to a stop on the left hand side. Miraculously, no cars hit me even though there were cars driving on all sides of me. It turns out, the front Axel rod broke off. According to natural law, I should have been hit. Even though that event shook me up, I continued full speed ahead and did not slow down until after I was married and had a couple kids. Through difficult pregnancies and an autoimmune condition, the Lord finally was able to get my attention and began to teach me how to lean back in him, rest and receive his complete and perfect love and grace. You can read more about that here. It is out of this place that I began to hear God more clearly in my life.

The fact that our God speaks to us is one thing that sets our God apart from other so called "gods".  Psalm 135:15 says, "The idols of the nations are silver and gold, but by the hands of men. They have mouths but cannot speak..." Our God is living and active! He is more than capable of speaking! Heck, he even brought the world into existence by speaking a Word and the Word became flesh and dwelt among us (John 1:14)!

Obvious ways God speaks to his people is through Scripture and through the Church. If you have ever read the lives of the Saints, you know he also desires to speak to us personally. The reasons we often do not hear him are because we are too busy, there is too much noise around us, we do not have our spiritual "antennas" set towards him, and we do not expect to hear him speak to us.

Learning to be still, rest and listen has helped in my ability to hear God in my life. There are many scripture verses about resting in the Lord. Here are a few of my favorites:

There are different ways God speaks to his people. It can come from a thought popping into our head that wasn't from us; visions, which can range from an image popping in to your head to a whole scene being played out, like a movie; sudden knowledge, you just know with your "knower"; an audible voice; and dreams.

Personally I have had a lot of fun with dreams. There are several types of dreams a person can have. There are dreams from our flesh that help us work things out in the night. These are usually in muted color. There are dreams from the enemy. Sometimes God allows these to help give us insight into the schemes of the enemy. These are usually in black and white. Then there are prophetic, God-given dreams. These usually stand out the most and have vivid color.

There are several ways you can discern if a word is from God or not. You want to first ask if it lines up with Scripture and Church teaching. You also want to ask yourself if the word is encouraging or is it full of guilt, manipulation or condemnation. Even corrective words should give hope and encouragement. God does not use guilt and manipulation to get his point across.

There are ways we can hear God better in our lives. First we need to know that he loves us and desires to speak to us. We need to rest in the knowledge of his love for us and expect him to speak. Another powerful tool to hearing the Lord speak is opening up our imaginations to him. He gave us our imaginations and he can use them. An example of this is Ignatian prayer in which you place yourself in the Gospel narrative. Often it starts with the imagination but then the Lord can take off with it and show us things. Children have great imaginations so I usually use this type of prayer with my children.

Last but not least, we need to take seriously the things that come to us and God will give us more. One day I was crying out to the Lord and telling him that I really needed to hear him speak to me. He said to me, "Well, when you are serious, I will speak." I realized after that, that he was actually speaking to me all the time but I wasn't taking his words seriously or listening. He often speaks in a still, small voice and it was easy to dismiss words and images coming to me as distractions. After the Lord spoke this to me I began writing things down that would come to me in prayer even if it didn't make much sense. One example of this was an image of elephants that popped into my mind one day in prayer. I wrote it down in my journal. Soon after that I was outside with my four year old daughter. She looked up in the sky and said, "Look Mommy! The clouds look like elephants!" That evening, I was watching the news and they were talking about a tornado that touched down in a little town in Alabama. They interviewed a little girl who said, "It was as if an elephant stomped on my house." The Lord definitely had my attention and I felt like he was trying to warn me that some "storms" were about to hit our nation. Soon after that I had a dream about 9/11. This was back in 1998. I believe the Lord showed me these things so I could pray for our nation.

The Lord is so kind and merciful and desires to speak to us a lot more than we are willing to listen. If we will put down our iPhones, turn off the television, be still and worship him, he will speak!
Posted by Lisa at 7:30 PM