The Poison of Pornograpy and the Effects it has had on my Life.

I have personally been affected by pornography because of the loved ones in my life. I was first introduced to it when I was a little girl. A close family member would look at pornographic magazines right in front of me. Unfortunately this family member was also a workaholic and paid little attention to me. Naturally what I subconsciously concluded from that as a little girl is that men were superior to women and the only thing women had to offer of value was their bodies. This was reinforced to me when at the age of 6, I was also molested by an older boy. This sent me down a road of sexual curiosity and I would often sneak the pornographic magazines that were in my home along with my friends and cousins. It is hard to put into words how damaging this was. 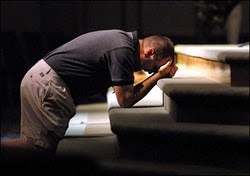 My husband has worked hard to overcome his addiction. He has taken advantage of the Sacrament of confession and has allowed God's love and grace to transform him. He is a different person than the one I married. He is better able to love me and be emotionally available to me. It has taken me a while however to be able to receive his love and let him love me. All those years took a toll. I have had to work through a lot of anger but haven't had anyone to talk to about it because I didn't want to make him look bad. I also put up walls to guard my heart and got used to it being just me and Jesus.What I am now realizing is it didn't need to be up to me to guard my own heart. Jesus would have been more than capable of guarding my heart for me if I would have fully entrusted it to him. As he is calling me to a higher level of surrender and I am letting go, those walls are coming down. I am finding healing and a greater level of freedom. Jesus truly is able to redeem anything especially when darkness is brought into the light. I am very proud of my husband for sharing his struggles. I trust that God will restore the years the locusts have eaten and I look forward to what the future holds with my love!
Posted by Lisa at 4:45 AM