Last week I was watching a documentary put on by the Imagine Sisters giving us a glimpse into the lives of several religious sisters from different orders. One of the sisters talked about working in a thrift store. While there she would ask customers if there was anything she could pray about for them. One woman she encountered and asked this question to said no because she was an athiest. This caused great sadness with the sister. She realized that if the woman didn't believe in God then the woman had no hope. She then heard God's still small voice telling her to meet the woman where she was at. The sister remembered that when the woman first came into the thrift store she saw a bird house she really liked but didn't have enough money for it. The sister then went over to the bird house and gave it to the woman as a gesture of God's love for her.

How often does God meet us where we are at too?! He could Lord his authority over us, reveal his glory and demand submission but he doesn't.  He knows all our flaws and imperfections and ways we are not able to receive his love but he is so patient and only brings things up when he knows we are ready. He remains hidden until our hearts are open to receive.

There are times we may beg for him to speak and reveal himself to us regarding a certain situation. We do not always understand when we do not receive an answer right away. Oftentimes it is out of his great mercy if we do not hear from him right away or see what he is doing because he knows we are not ready to receive and obey. If we hear from him and we don't act on it we will be held more accountable. He never witholds from us for his own benefit but out of mercy and compassion for us. "Blessed are those who have not seen and still believe!" - John 20:29

Maybe the reason Jesus hides himself under the appearance of bread and wine in the Eucharist is so more people will receive him. If our eyes were truly open to the reality of the magnitude of his presence in the Eucharist, would we run in the other direction and proclaim that we are not worthy or would we still be able to humbly receive his love in that way and be willing to approach his throne of grace? This way he is able to work his grace in hidden and mysterious ways. 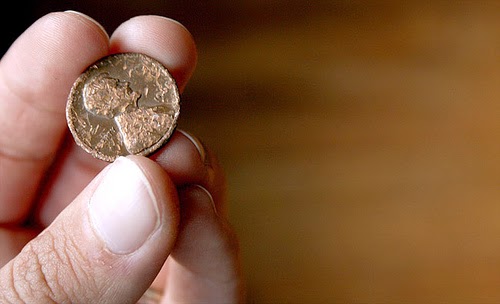 The Lord also often hides us, his people. There are some reading this that may feel unnoticed and almost hidden to the world. There are things you desire to do but almost feel invisible at times. That is because you are like a lucky penny that someone finds on the street and puts in their pocket but went unnoticed by many other people before. Like the person that notices a lucky penny, the Lord notices you and hides you in the palm of his hand. He desires to do a work in you and transform you into his image. He reveals himself to you in secret and desires you to grow in intimacy with him.. You may feel hidden and ordinary to the world but the Lord calls you his beloved. The only thing you are required to do during this process is surrender and receive his love. Often times we can grow impatient and question why it is taking him so long and why is he doing it this way?!

Let's not forget that he came to us as a little baby and remained hidden for 30 years. He does not have a problem with hiddenness if it will help us and bring God more glory in the end. So, let us surrender to the process, be content with hiddenness and at the proper time, the Lord will pull us out and display his glory through us.